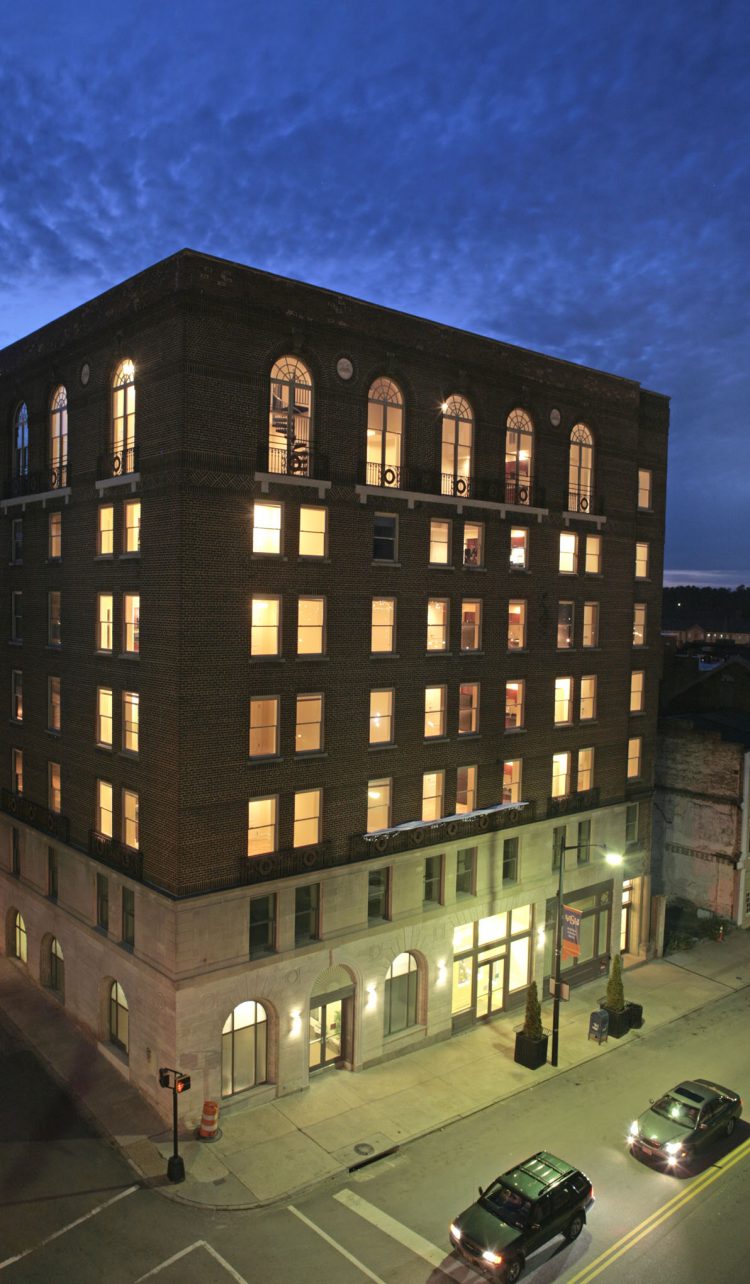 GENERAL INFORMATION: Courthouse View Apartments are located in the heart of downtown Petersburg, just one block north of the Old Towne, with its thriving restaurants and fascinating shops. The 41 apartment homes are less than a mile from the north/south entrance ramps to I-95 and approximately 5 miles west of the main gate to Fort Lee. The commuter bus to downtown Richmond stops just one block away, and downtown Richmond is only 25 miles north. The first floor has 4,482 sf of commercial office space.

ARCHITECTURAL FEATURES: The Community Bank Building is a Renaissance Revival-style high-rise built ca. 1911-1914. The seven-story brick structure is laid up in five-course American bond over a steel frame, with limestone and terrazzo cladding on portions of the exterior. The first floor, which was extensively altered in recent decades, has a centered, recessed entry and fixed windows. Terrazzo covers the original brick facing at the first floor. The second floor has double-hung, one-over-one windows, and a limestone facing and quoins. The upper floors are identical. The building has a flat roof with a parapet.

HISTORY/SIGNIFICANCE: The historic structure was designed by John Kevan Peebles, a native of Petersburg and a highly regarded early 20th century architect. Among Peebles’ other works are the wings to Thomas Jefferson’s Virginia State Capitol Building (1902-1906), the ballroom of the Jefferson Hotel in Richmond (1905), and Phi Beta Kappa Memorial Hall at the College of William & Mary (1924-1926). The building began construction in 1911 and was Petersburg’s first skyscraper. Built by the Petersburg Benevolent Mechanics Association on the site of their previous Mechanics Hall, the Community Bank Building is one of a handful of turn-of-the-century high-rise buildings remaining in downtown Petersburg. The project received both federal and state historic rehabilitation tax credits.

Warning: count(): Parameter must be an array or an object that implements Countable in /homepages/10/d411961120/htdocs/clickandbuilds/EchelonResources/wp-content/plugins/ultimate-responsive-image-slider/layout.php on line 17