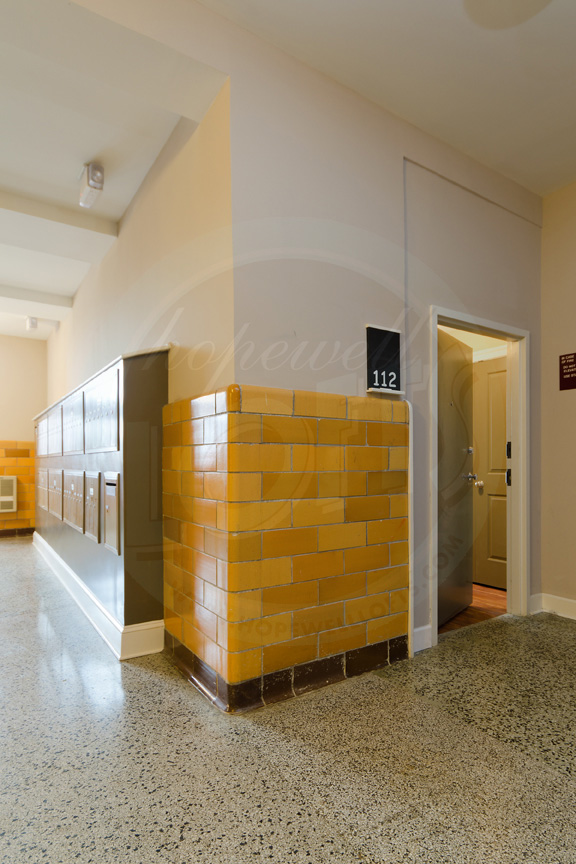 GENERAL INFORMATION: Hopewell Lofts is the beautiful conversion of the historic James E. Mallonee School (c. 1925) in downtown Hopewell, Virginia. Just five miles from Fort Lee and a stone’s throw from the James River, Hopewell Lofts is within immediate walking distance to shops and restaurants, as well as the Tri-city’s rich Antebellum history. The building is adjacent to Merner Field, an active sports venue for the entire Hopewell community. Built on a campus-like setting ringed by mature live oak trees, the Lofts feature high ceilings, hardwood floors and remarkable natural light. There are 50 apartment homes that enjoy a clubroom space in the historic auditorium, on-site storage, free on-site parking, refinished terrazzo floors, and some old chalkboards too! As part of the redevelopment, the property was individually listed on the National Register of Historic Places, and the project utilized federal and state historic rehabilitation tax credits. Hopewell Lofts is the proud recipient of the “Best Preservation Project, 2010” from the Historic Hopewell Foundation.

ARCHITECTURAL FEATURES: The historic James E. Mallonee School has a period of significance of 1925-1959. The primary building served as a school until 1988 when the school board deemed it no longer necessary for educational purposes. The Hopewell High School Complex is located north of City Point Road, slightly west of the City Point Road commercial corridor. The complex is bound by W. Broadway Avenue to the north, N. 11th Avenue to the east, W. City Point Road to the south, and N. 14th avenue to the west. There is a circular drive in front of the main school building. The complex consists of 8 contributing and 2 non-contributing resources including a school, an athletic field with outbuildings, a historic home economics cottage, a gym, and a science and library building.
The original portion of the building is a two-story, seven-bay brick building resting on a full basement. The roof is flat with a stylized stepped parapet. The façade features Tudor Revival details including decorative brickwork panels and an arched stone entryway which also features decorative brick work. A stone panel above the entrance reads “Hopewell High School”. A large window is boarded up on the second floor of the entrance bay. Above that, the words “James E. Mallonee School” are lettered below the roofline. The façade also features quoining on its projecting portions. There are four pairs of doors with one wood and one glass panel each. Each pair of doors has a transom above it with 18 divided lights. Typically, the steel sash windows have 18 divided lights each. Some of the windows feature a hopper mechanism in the bottom 6 panes. The design and layout of the interior of the main school building is typical of schools built during the 1920s. The basement level featured classrooms and labs, a janitor and furnace room, a kitchen and a cafeteria, locker rooms, and offices. The interior doors are of the single and paired variety with wood panels and sash. Some feature a wood framed transom with six divided lights. The main floor of the school building originally featured classrooms, the library, a book room, restrooms, the principle’s office, the school board office, superintendent of school’s office, and the auditorium and maple wood stage. The second floor featured classrooms, a teacher’s room, a study hall, and the upper portion of the auditorium and stage with a gallery. The floors on the interior of the building are a mixture of wood, terrazzo and tile. The main school building was designed by Fred A. Bishop of Richmond, VA. Historic floor plans are available at the Virginia Department of Education in Richmond.

There was one addition to the main school building. In 1935, the two-story shop addition was appended to the rear of the school. It features concrete footing and is constructed of concrete block clad with brick veneer. It features a flat roof with metal gutters and cant strips. There is one interior chimney on the northwest corner. All of the windows have been boarded up. There is a pair of modern doors installed in a former overhead door opening on the west elevation. Cinderblocks were used to fill in the space not filled by the modern doors. There is also one metal door at the southeast corner of the addition. Historically, the shop building featured a general metal shop, a wash room, tool & supply rooms, storage, a woodworking shop, a finishing room, and an office. The addition was designed by Carneal & Johnston, Architects and Engineers of Richmond, VA.

HISTORY/SIGNIFICANCE: The Hopewell High School Complex is located in the City of Hopewell, Virginia and is surrounded by a residential neighborhood mixed with several commercial entities. Hopewell and its surrounding areas were settled during colonial times by early English settlers. Its location on the banks of the Appomattox River made the area an ideal location for military headquarters during the Revolutionary, Civil and both World Wars. The school was built in the 1920s and served as the only high school in the area for the majority of Hopewell’s population at the time. It was a full service school with an ever expanding curriculum. The Hopewell High School Complex was made eligible for listing in the National Register of Historic Places under Criterion C for Architecture for its development as a school complex during the first half of the 20th-century, and for its architectural integrity reminiscent of the period 1924-1959. The Hopewell High School Complex is listed on the Virginia Landmarks Register as of the June 18, 2009 SRB/HRB meeting. The school was used as a high school until 1968 when a new school was erected 1.5 miles southwest of this complex. The Hopewell Lofts project received both federal and state historic rehabilitation tax credits.